How To Prevent Unconscious Bias From Ruining Your Culture and Diversity

Unconscious bias can stem from stereotypes that we make about certain groups of people based on factors like race, ethnicity, social status, and religion, among others, formed outside our own conscious awareness.

They lie in our blind spots and are often impossible to spot in ourselves, making it a difficult issue to deal with. However, there are ways to address them. So, in this article, we’ll walk you through how to prevent unconscious bias and protect the culture and diversity in your organization.

Unconscious bias is lurking in your organization

Implicit biases can ruin the diversity and productivity of your company. When left unchecked, they can result in a homogenous culture and lead you to make hiring mistakes, as well as strategic blunders that can cost your organization dearly.

These unconscious biases tend to lurk in organizations:

Gender bias happens when you favor one gender over another for a role in your organization. This usually happens during the hiring process and when it comes to promotions inside the organization.

The bias happens when you discriminate against a person according to their age. This usually happens to older people (for example, when they try to apply for jobs in fast-paced IT companies). But it can also happen to younger people (usually targetting their experience levels).

The bias happens when you give an employee favorable treatment because of their appearance.

The bias happens when we develop a positive outlook for the employee according to just one of their traits. The bias creates a spill-over effect where we start thinking that the person who is great at one thing is also great at many other things.

This bias is the contrary bias to the Halo effect—  this is where we develop a negative outlook for the person according to one of their negative traits.

Confirmation bias happens when we seek out information that would confirm our point of view instead of looking at the problem from multiple perspectives.

Conformity bias happens when we change our opinion because of peer pressure. This prevents conflicts and stifles creativity in a team.

Affinity bias happens when we favor people who look like us or have similar experiences as we do. This can be a really big problem when it comes to diversity in companies.

How to prevent unconscious bias in your organization

There are many other biases at play in everyday office interactions, but these are the most common ones. However, there are ways how to deal with these unconscious biases in your organization.

You can mitigate unconscious bias, but you and your organization will need to implement essential mechanisms to deal with them…

The first step in dealing with any kind of problem is realizing that there’s a problem. The same thing applies to unconscious biases.

Learning about different kinds of biases (and your own biases) will be the first step in dealing with them in the workplace. Because once you see them, you can create a strategy to deal with them.

2. Figure out which biases would affect you and your workplace the most

There are hundreds of unconscious biases, but finding out which ones are the most prevalent for your and your organization is imperative. Maybe you have a culture problem where the hiring managers are only hiring people according to the “beer test” (If the manager would go out for a beer with you, you would get hired). If that’s the case, you should work on affinity bias.

On the other hand, maybe you’re a fast-growing IT company and you’re having problems with ageism by not taking into account older people who might have the necessary skill set for your company and some extra experience.

Figuring out which biases affect you and your company the most will help you decide on the best course of action to combat them.

Raising awareness of unconscious biases is the first step, but it’s not the last step to solving the problem.

If you want to address unconscious bias in the workplace, you will have to monitor your behavior first and then your organization’s actions. When you track behavior, you will notice where you’re constantly making mistakes and it will be easier for you to fix them.

Maybe you’re not speaking out on team meetings since you prefer to keep things conflict-free, but you notice that it stifles creativity and team innovation. That means you should combat conformity bias and speak up at your next team meeting.

4. Use data to make decisions

Biases hide in narratives so try to use data as much as possible. When you use data to make decisions, you will suspend your unconscious biases and make the decision according to the data that you and your company collected.

The data-driven decision-making process will help you limit “gut feeling” decisions and will present hard data as the source of making a certain decision. The questions won’t be “which candidates we liked the most” in the recruitment process, but “which candidates scored the highest on our pre-employment tests.”

5. Create transparency across your organization

Transparent processes inside the organization enable employees to look into processes and ask questions if they think something isn’t right.

This is especially true when it comes to hiring and promotion processes. It’s essential to know what people are being promoted for. That signals to the employees the things that they have to do in the company to get promoted. Transparency will reduce unconscious bias across the organization.

The same applies to the hiring process— having a transparent hiring process tells employees how (and why) people are being hired in the organization. This eliminates the unconscious bias from both the hiring and promotion process.

6. Encourage team members to speak up

When you start tracking unconscious bias across the company, it will take some time before you deal with all of it on an organizational level. The biggest support system during that time is your employees.

Leaders either lead by example or they don’t lead at all. So when there’s an initiative to eliminate and prevent unconscious bias in the workplace, the leaders in the companies will need to be the first ones to do so. Employees emulate the behavior of their leaders.

Holding decision-makers accountable for diversity, inclusion, and preventing unconscious bias will make everyone in the organization accountable for fixing the problem. But if the leaders aren’t on board with the initiative, it will be almost impossible for employees to be the ones to do so.

The initiative needs to be supported by the C-suite since most employees will emulate their behavior so make sure that the leadership team is on board with the process.

Once you have delivered the training to all of your employees and they understood the problems regarding unconscious bias, it’s time to execute the initiative and that means holding employees accountable.

When the leadership team is on board, you need to ensure that the initiative doesn’t just stay as some nice words on a piece of paper, but that it’s actually being implemented across the organization.

When it comes to the hiring process, the organization will have to find people with diverse backgrounds and hire them as employees for their company, creating a diverse team in your company. One of the best ways to ensure you have this happens is to include diverse voices in your hiring process.

The second focus area for diversity and inclusion goals is promotions. When it comes to promotions, the entire process needs to be transparent at first and then the companies need to ensure that they have enough diverse voices in the managerial and C-level positions.

Unconscious bias is there and it’s your responsibility to find it and create a strategy to deal with it. From providing unconscious bias training to setting diversity and inclusion goals, you should now have an idea of the different strategies you can implement at your organization to tackle unconscious bias. But if you want an even more in-depth look at how implicit biases show themselves in the workplace, check out our article on Unconscious Bias Examples To Be Aware of at Your Organization.

Bruno is the founder of Growthabit.com, a nonfiction business book summaries website. As a former head of HR at a global organization, Bruno writes for HR media outlets and various HR tech companies.

We love delivering features to help your team hire better. So far this year we’ve made 28 new feature updates...

Best Teacher Recruitment Strategies To Beef Up Your Candidate Pool

It’s no secret that the United States is facing a teacher shortage of mass proportions.  A nationally representative EducationWeek Research...

The demand for AI recruitment software is huge — and growing.  Analysts estimate that the market for AI in recruitment...

Copyright © 2022 All Rights Reserved by Vervoe 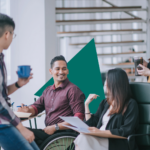 Next story: How Did We Get Here? A Brief History of Personality Tests in Hiring

Don't miss out on new resources

This website uses cookies to ensure you get the best experience on our website.
Do not sell my personal information
Read MoreCookie Settings
Reject AllAccept
Manage consent

This website uses cookies to improve your experience while you navigate through the website. Out of these, the cookies that are categorized as necessary are stored on your browser as they are essential for the working of basic functionalities of the website. We also use third-party cookies that help us analyze and understand how you use this website. These cookies will be stored in your browser only with your consent. You also have the option to opt-out of these cookies. But opting out of some of these cookies may affect your browsing experience.
Necessary Always Enabled
Necessary cookies are absolutely essential for the website to function properly. These cookies ensure basic functionalities and security features of the website, anonymously.
Functional
Functional cookies help to perform certain functionalities like sharing the content of the website on social media platforms, collect feedbacks, and other third-party features.
Performance
Performance cookies are used to understand and analyze the key performance indexes of the website which helps in delivering a better user experience for the visitors.
Analytics
Analytical cookies are used to understand how visitors interact with the website. These cookies help provide information on metrics the number of visitors, bounce rate, traffic source, etc.
Advertisement
Advertisement cookies are used to provide visitors with relevant ads and marketing campaigns. These cookies track visitors across websites and collect information to provide customized ads.
Others
Other uncategorized cookies are those that are being analyzed and have not been classified into a category as yet.
Save & Accept
Powered by